Baritone sax player Kate and I got to talking about Prince and his sudden passing. I am saddened by his death. His music holds a special place in my life, as it does with so many people around the world. Witness the outpouring of grief by fans (and a President) in the last 36 hours.

But not for Kate. She didn’t appreciate his music. In her words, “I just never liked it.”

In talking about music appreciation, I’m curious about why we like this song and not that song; or why we dig this genre and not that genre.

Anyone out there remember the weekly TV show American Bandstand? If you do, you’ll recall that Dick Clark would play a new piece of music for some teens to listen to and rate.

Very often, the young listener would say something like, “It was easy to dance to. I give it a 92.”

Not a very in-depth analysis of the music; just a gut reaction of “do I like this?” or “do I hate this?”.

How about we go a little deeper into a song or artist? What criteria can we use to discern the character of the music?

10 Musical Concepts that will help you appreciate any song

This is by no means an exhaustive list. It is a list of the first 10 things I thought of while writing this morning.

Let’s explore them one at a time, using one of my fave Prince songs, 1999.

It’s in a major key. It’s a party song after all!

‘Cuz they say two thousand zero zero party over,
Oops out of time
So tonight I’m gonna party like it’s 1999

Quick tempo. About 120 beats per minute. Strong back beat – you can hear that in the drums hitting beats 2 and 4 with snare, cymbal and bass drum. The bass guitar holds plays a strong pulse on beats 1 and 3.

Compare to the Natural World

Here’s where we can get expressive and ease up on identifying musical concepts so literally. How is the song 1999 reflective of the natural world? I love looking at music this way.

In this song, Prince tells a story of having a dream in which he woke up and it was the last day of 1999, or judgement day. The year 2000 signals the end of the world.

But when I woke up this mornin’
Coulda sworn it was judgment day…
…Party over, oops, ought of time

The date construct that we humans have created doesn’t match up to the Natural World. So a song about the “end of the world and century” is made ‘tongue in cheek’.

“Life is just a party,” Prince sings, “And parties weren’t meant to last.”

1999 follows the standard song form of two verses, then a bridge section, followed by another verse. It opens with a rhythmic introduction that sets the feel and excitement of the song. It closes with an outro, also called a coda or a tag ending.

Another way to talk about form is to use capital letters to refer to each section of a song. Removing the intro and outro of 1999, we are left with A-A-B-A. “A” represents each verse. “B” represents the bridge section.

There is a steady repeated rhythm throughout this song. Which probably makes it “easy to dance to”! 😉

A fun thing Prince does with the beginning of the song is to play a drone on the synth and on top of that drums and bass play a simple rhythm that establishes the tempo. Then the drone stops and the synth joins the same pulsing rhythm of the bass.

Rather than me telling you where the dissonance and consonance in 1999 is, I’ll let you listen and discern for yourself. Because dissonance is one of those things that’s a bit subjective and personal. In his book, This Is Your Brain On Music, Daniel Levitin writes that “…infants show a preference for consonance over dissonance. Appreciating dissonance comes later in life and people differ in how much dissonance they can tolerate.”

I’ve alluded to this already by mentioning the drone at the start of the song. That’s an example of continuous sound. The back beat and the percussive rhythm are examples of short sounds that imply silence between the rhythmic bursts.

In musical notation, expression refers to markings on sheet music which give the performer information about how to interpret and express the music. Examples include words like Scherzando (playful), Rubato (freely in time), Tranquillo (quiet, calm), Agitato (agitated, excited), and Maestoso (majestic), to name a few.

In the song 1999, I would imagine an expression marking of With Bounce, or even better, Con Brio (with spirit).

Well, Kate, if you’re reading this, I’m not expecting that now you would enjoy the music of Prince. But I am hoping I have given all my readers some helpful steps towards digging into a song and finding appreciation.

If You’ve Read This Far…

The Sound Of My Voice

If Your Life Were A Song Part II 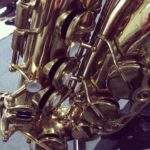 Keeping Your Clarinet and Saxophone In Tip-Top Playing Condition