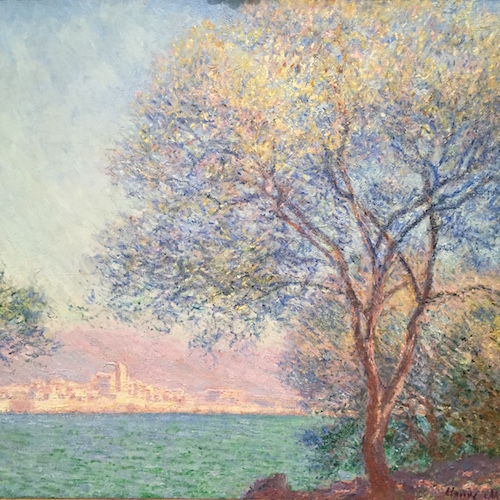 Here’s a scene – I am washing dishes and have the stereo blasting from the other room at pretty high volume so I can hear the music over the sound of running water and clinking dishes. I’m listening to the classical station and they are broadcasting Irish Rhapsody #5 by Charles Stanford.

When Anita walks inside from gardening, she puts the kibosh on the volume as well as the music. “It’s too loud!” “It’s too harsh!” or the real truth for her, “It’s discordant!”

It’s important to know what one likes and doesn’t like. It’s fine to be able to discern between pleasant and unpleasant sounds.

I’m reminded of a recent visit to the Barnes Museum in Philadelphia, Penn. Joseph Barnes was a collector of paintings and decorative metal work. He displayed his collection in groupings that he called ‘ensembles.’ A set of four ensembles for the four walls of a small room; 24 rooms in all.

Each wall would have some combination of paintings, wooden chests, coffee urns, door knockers, hinges and other metal art. Of the painters, Renoir, Matisse and Cezanne might share a wall with a series of hinges.

The website tells us that “Barnes’s aim was to demonstrate the universality of the impulse for creative expressions, so he mixed art and craft across cultures and periods.” “…arranging and rearranging the works according to the formal principles of light, line, color, and space, which he regarded as the universal building blocks of art, rather than by chronology, nationality, style or genre, the traditional museum divisions.”

The Musician at the Art Museum

For someone like myself, who considers herself to be ignorant of artistic genres and artist styles, this museum visit was a great experience.

It gave me a chance to view contrasting artists side by side and begin to develop some discernment of my own in the world of visual art.

In the beginning, I was gravitating to Renoir. I enjoyed the mostly realistic portrayal of the human form as well as the soft lines. Whereas the cubist works of Picasso and some early works of Matisse (what I referred to as stick drawings) mostly turned me off.

Then I heard Monet!

Color and light rendered in such exquisite combination. Simple landscapes expressed in vivid relief. Here is a photo I took of his Morning at Antibes.

This visit to the Barnes helped me develop my tastes in art and learn what I like and what I don’t.

I also visited the Philadelphia Museum of Art next door to the Barnes. The featured exhibit was Pop International, a feature of Pop art from the 1960s as expressed around the world. This exhibit provoked more reactions in me, which was basically the point of Pop Art.

My experiences at the two museums gave me some insight into Anita’s strong reactions to certain kinds of music. She was raised on early classical and Pete Seeger.

She finds some modern jazz music to be discordant. And when symphonic works build any kind of tension or use minor sounds, she labels it “depressing” or “harsh sounding.”

My musical upbringing, by contrast, was a steady diet of The Jackson Five, musicals like “Camelot“, and Frank Sinatra. In college, I was exposed to a wide range of symphonic band and orchestra music, of which I became enamored.

The Artist at The Symphony

When we look at our respective exposures to art, Anita is well versed in most if not all visual art forms. She makes art using acrylics, collage, and photography.

I took a wood block class one Summer in high school. I don’t mean to minimize my exposure to art. I’m what you’d call an amateur artist working in my preferred medium of pen and ink. What I don’t have is the understanding and appreciation of art’s periods and styles and genres. I just like to draw. 😉

After these visits to the Barnes and PMOA, I have had some insight and understanding into how people who don’t have the exposure to a wide range of musical genres might experience jazz as discordant. Or how someone without training and knowledge about music might hear the development of a symphonic theme as ‘too much tension’ or ‘makes me want to scream.’

In these weekly articles, I intend to teach and explain and hopefully shed some light on music appreciation. And in so doing, help you enjoy music.

A Virtual Recital
May 9, 2020
Search
Students and Parents agree:

Caiden’s dad, Brian: “Mary Ellen is a great saxophone teacher. She is enthusiastic, patient, and listens to her pupils questions thoughtfully. It was her excellent website chock-full of raving testimonials that made us decide to sign up for lessons for our son, Caiden.”
END_OF_DOCUMENT_TOKEN_TO_BE_REPLACED

Private clarinet lessons have made a difference in my life. I’m learning things I hadn’t heard from my band teacher. I may be busier now but I like playing music more!
END_OF_DOCUMENT_TOKEN_TO_BE_REPLACED

Clarinet lessons have helped me focus more on my embouchure.
I’ve had to put in hard work to improve my skills. The results have been very good!
END_OF_DOCUMENT_TOKEN_TO_BE_REPLACED

Since taking saxophone lessons with Mary Ellen Grace, I’ve become a lot more confident in my playing. I’ve learned things about playing the sax that I wasn’t taught at school and I always leave class with more knowledge.
END_OF_DOCUMENT_TOKEN_TO_BE_REPLACED

We had some friends over for breakfast one morning and our son Alan gave a lovely performance of Old King Wenceslas, Ode to Joy, and Old MacDonald. They were impressed that Alan has only been playing for a few months.
END_OF_DOCUMENT_TOKEN_TO_BE_REPLACED

If you have a son or daughter that is curious or motivated [about sax or clarinet] or even in a rut looking for new challenges, ideas, and practice methods, give [lessons with Mary Ellen] a shot! If you’re clear about your goals, Mary Ellen always responds and is flexible with her teaching techniques.
END_OF_DOCUMENT_TOKEN_TO_BE_REPLACED

Give it a shot!
Contact Mary Ellen
Complete the form and Mary Ellen will contact you. Get more information about lessons with Mary Ellen or schedule your first lesson right away!
Go to Top