Contentment is the new work for wind ensemble by myself and Kelly Dugger. It will have its world premiere on March 29 in Las Vegas.

I’m flying down for the performance and a visit with my sister and her family. The Las Vegas symphonic band, The Desert Winds, will perform our work under the baton of co-composer Kelly Dugger.

Two weeks later, Kelly is coming up to Portland for the Spring show of The Portland Gay Symphonic Band on April 12. I’ll be conducting Contentment in Portland.

We are thrilled to have our work performed. We have both composed other works individually, mostly for smaller ensembles like trios and quartets. Writing for a 35-piece group is a more intense process. It was a great experience to have each other’s support and skills during the writing process.

How Did Contentment Come To Be? How did Contentment come to be, you wonder? It was inspired by my meditation practice. The main theme, secondary theme, and variations came to me during a personal meditation retreat in April 2013.

I do a lot of composing on soprano sax and this piece is no different. When I brought it to Kelly, she was able to extrapolate the harmonic structure that I imagined in my head, from just hearing the melodic line. The two of us combined our strengths in composing, arranging and orchestration to create a piece that expresses through music, the practice of meditation.

The meditation session begins clear and strong (Main Theme) with the “trying too hard” energy of a beginning meditator. Listen past the Monkey Mind chatter to find the Contentment melody struggling to prevail.

In the last third of the piece, we hear a variation of the theme in 3/4 time, which gradually decelerates into the last return of the main theme. The bassoon’s final notes return the meditator’s practice to calm and Contentment.

Contact me to arrange a performance of Contentment in your area! 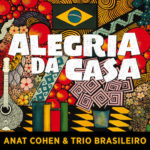 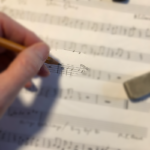 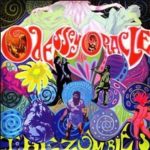 Swing into Day 11 of the 30 Day Music Challenge!

Let Every Voice Be Heard